Hello friends! Welcome to the Twice as Blessed Nest! We are a family of four from the Midwest who enjoys all that life has to offer! Before we begin I would like to share Chad and my story to show you how we got from infertility to being twice as blessed within a year!

Chad and I met in 2007 at church. I was finally and for the first time in my life content with being single so God decided it was finally time to introduce me to the man I would spend my life with. Chad came to our church because his church of 20 people had no other young people other than his siblings. He was getting anxious to meet someone so he decided to check out our church — and ended up sitting right behind me. During the greeting time I turned around and was surprised to see someone around my age that I didn’t know. However I was bound and determined that I was going to be single for this season so I began to think of how I could set up this cute guy with my best friend… They were both tall and single so why not?! However I couldn’t this thought out of the back of my head — boy he was cute! What if…..
Chad continued to come to our church and sat with me since he now “knew” me and we began to go out to lunch afterwards. Eventually we started dating officially and the rest is history. We never had the ideal dating situation as he was working 2nd shift when we met and then moved to Michigan for a year after that.

We got married on a beautiful day in July 2009. We honeymooned in Jamaica and returned home to Chad’s job changing to 3rd shift. So much for newlyweds getting used to sleeping in the same bed…


Over a year later Chad got back on 1st shift and we decided to start trying for a family. After a year and a half of trying I went on infertility medicine for 6 months which made me horribly sick. The doctor and I decided to wait for a while because IVF wasn’t for us yet. We looked into adoption during the summer of 2011 and decided to get put on a list and adoption website!

On January 22, 2012 we got a phone call during lunch after church saying there was a family that had a baby boy who was 2 days old and they had chosen us to be his parents!!! We were so excited that God had finally given us a child. So we quickly packed up the car and headed to Memphis, TN where we met our son Jack who was only 3 days old.

Life as we knew it changed dramatically as it often does when children come into the picture. I quit my Special Education teaching position and became a stay at home mom. 3 months after Jack came home Chad had to work the CAT strike over 2 hours away so he was gone a lot. However the stress of not being able to have a baby and work was gone so life as we knew it was beautiful!

One day I wasn’t feeling good and thought I was coming down with the flu. Days later I still didn’t feel quite right so for fun I got a pregnancy test. I took the test and unpacked groceries while waiting (I wasn’t worried at all – they always turned negative). When I glanced over at the test it read POSITIVE! I didn’t know what to think. Then I looked down at the sleeping baby in the swing… and I laughed. God had quite the sense of humor. We had asked him to give us a baby if it was His will. Apparently His will was 2 babies within a year! One was adopted and the other was through pregnancy.

Pregnancy with 24-7 nausea and low blood sugar is tough enough, but add a 3 month old baby you are learning to parent is extra tough. But I learned how to ask for help and somehow we managed to get through pregnancy. On January 4, 2013 Lucy was born on my 30th birthday. (I had always wanted to have kids by the time I was 30… so God definitely made sure it happened even when I was positive that it was impossible.)

We became a family of four and have felt beyond blessed. Have we loved every moment… no! Life isn’t perfect and there are imperfect moments. Would we trade this life for another? No! We love our life through the ups and downs. Join us on our imperfect, roller coaster of a ride life! God Bless! 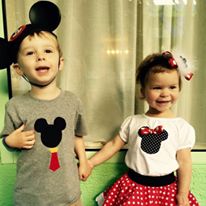