It was just another day on social media….

I was scrolling through my news feed looking at everyone’s family Christmas pictures, yummy holiday treats, and all of the happy Holiday happenings when suddenly it was interrupted by….

It had been a while since I was interrupted with something that broke up the joyful nature of my Facebook feed. But there it was…. Outrage from one of my friends. From that day onward the political posts continued to take over my feed. I could chose to ignore these posts (and sometimes I did unfollow posts of that nature – not unfriend people – just unfollow the political site,) but if you know me at all I am a very passionate person. As hard as I try I like to keep political talk to a minimum, but do enjoy stating my opinion. So I reposted an article that I thought was neutral but it turns out no matter how neutral the post – people on both sides of the fence will commentate.

I realized after watching this political battle on my news feed that I had a pretty even number of friends on both sides of the fence. I had friends that were very liberal and friends that were very conservative. Most of the people that I engaged with on either side of the political spectrum were civil and could get into a healthy debate. A few people were irrational and were just there to argue, but for the most part it was healthy discussion. And after many years of having a Facebook presence I have only had 1 friend block me due to my political beliefs.

It was here that I realized…. I have a very diverse group of friends. This made me happy! I was so glad that I had surrounded myself, not just with people who think like me, but people who had different viewpoints. Sometimes we get into a homogeneous mindset and only want to be around people that think just like us because it’s easier to just pat each other on the back thinking we are the only right way.

Proverbs 18:2 (NIV) says ” Fools find no pleasure in understanding
but delight in airing their own opinions.” 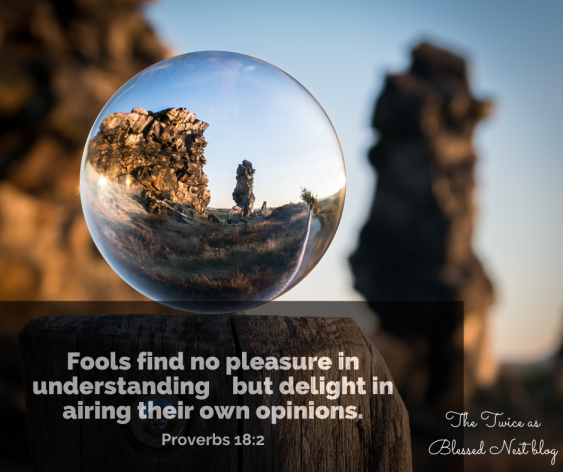 When we surround ourselves with people that don’t always have the same perspective and ideas as us we become challenged. Find people that will ask you the hard questions. We can have people push our ideas and ask questions which in turn can strengthen our own ideas OR can change our perspective to include someone else’s thoughts. Sometimes a mind shift is a good thing! Our eyes may be opened to something else that we didn’t even consider.

I’m not asking you to change your ideas just because someone else says so, but I am challenging you to look through another lens and to walk in someone else’s shoes.

So as a challenge I ask you to embrace people that don’t always share your viewpoints, whether it involves politics, religion, race, and ideals. Will you rise to the challenge in 2020?