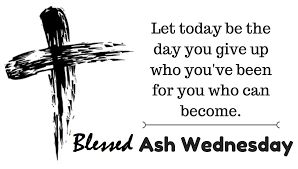 Today is Ash Wednesday, the beginning of Lent. This year I have had the same internal dialogue going on that I have every year about the annual question, “What am I giving up for Lent?” I have never been good about giving something up and sticking to it. I admit it…. I’m addicted to my Diet Dr. Pepper, coffee, and my TV shows. And if I give them up — I’m not getting closer to Jesus because of it. So something else has to go. So I thought about Social Media? So many of my friends have given that up. But because I work part time as a social media coordinator that isn’t an option for me either. After praying and praying about this question that has rolled around in my head for the past few weeks this is what I feel has been prompted by the Holy Spirit. He once again spoke to me in that still, small voice saying…..

So this year for Lent, I’m not giving up something tangible. I am giving up some of the negative thoughts that pop in my head on a daily basis. I am fixing my eyes on Jesus and His Word. I am replacing all of the lies that are whispered to me from an enemy that is real, with the truth from God the Father who has reveled His truth through his love letters to me (The Bible). During this Lenten season, let’s use it as a time to give up what we think we are or have been, with who we can become in Jesus Christ.

I have been watching the Bachelor since 2006 when I was a single girl in my apartment dreaming of my own love story. I used to get captivated in the romantic settings, dates, and of course those long dramatic stares into the Bachelor’s eyes…

Now 14 years later I am still captivated by this “reality” TV show because I am a sucker for watching shows about people and how they live. I love watching  and studying their personalities, stories, and their characters.

This season has been less than thrilling, even though Chris Harrison has promised it will be the “most dramatic season yet.” Same old drama between the girls, same internal conflict with the Bachelor who is in love with more than one girl…. nothing new…. or is there?!

Last night we saw Madison, one of the finalists, who has been vocal about her faith through her actions and then last night through her words as well. Madison has not allowed herself to get caught up in the other girls drama and has carried herself through this process with dignity and class. She has also been very strong expressing her convictions to wait to have sex until her wedding night. Since this was the fantasy suite week where the finalists are allowed an overnight date (which allows for a more physical relationship to form – usually sex), Madison had pulled Peter aside and had expressed to him that she wasn’t sure she could continue in this process if he was going to become physically intimate with the other two girls. She didn’t want to give him an ultimatum but wanted him to know where her heart was. Ultimately, Peter chose to spend the night with these other two women in their fantasy suite during their overnight dates and then was upfront with Madison on the evening of their fantasy suite date. She handled herself with grace and poise, even though her heart was breaking because he hadn’t put value on her words a few nights before about her ultimatum. After watching a heartbreaking conversation where she stood very strong in her convictions and didn’t allow her standards to lessen, she eliminated herself from the show.

As I was processing through what just happened on national television, I kept thinking of this verse that has always been a big part of my life (especially through my teenage years). Romans 12:2 says “Do not conform to the pattern of this world, but be transformed by the renewing of your mind. Then you will be able to test and approve what God’s will is—his good, pleasing and perfect will.”

Madison just showed Christian girls everywhere that you should value yourself enough to not hold yourself to the world’s standards, but to hold yourself to the standards laid out in the Bible. She also told young women everywhere to value themselves enough to not settle for something less than what you want. She knows her value and wants her future spouse to value her in the same regard.

She didn’t portray it as being an easy choice, because let’s be honest, making the right choice isn’t always the easiest option. She was heart-broken and disappointed. But she knew that Jesus has a plan for her and is trusting in that instead of trusting in her feelings for Peter alone.

As I watched this unfold and processed through it, it gave me hope for my own daughter. I pray that Lucy will someday hold herself to a high standard because she is worth it. Her value shouldn’t just be in what the world (or even her future husband) thinks of her. It should be the value that Jesus places on her. He loved her enough to die on cross for her. He calls her beautiful and His princess. He says in Proverbs 3:5 “She is more precious than rubies; nothing you desire can compare with her.” My prayer is that Lucy will always know that worth and continue to follow God’s standards, not the world’s.